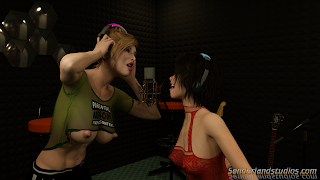 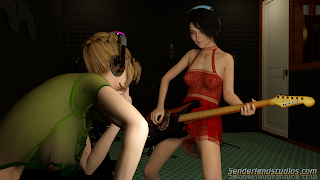 Here is part one of Cindy's New Album.
Cindy returns the studio after having been dropped by her label for the whole dick stunt on the web talk show. She decided to move to Rose Hills and live there. After securing funding from Bill Sender she returns to the studio to make her next album.
Bill asks her to include Reily in one of her songs singing back up. Cindy agrees and then finds out how well Reily can sing. Then she finds out Reily can play the guitar, both as rhythm and lead and even play the keyboards.
Cindy quickly adds Reily to her band and sets out to re-record her already laid tracks. Cindy is going platinum!
Soon you will meet Phoebe the bass player and Cindy's sister. There will be Jenny, Cindy's drummer completing the band.

Hey everyone. Well I got my parts and put this beast back together. I did lose a drive but have 99% of my crap backed up. Good news there. Stuff just doesn't want to work like it used to. I have to work on my settings on my programs to get things working again. When you don't use set them everyday you forget what they are set to. I'm still tweaking them. Some things in my files that used to work now give me issues. I hope to have things going soon. I'll post a series here shortly, it's ongoing so the first part is not very sexy, it's setting up for more parts. I see the light at the end of the tunnel.
Bill
Posted by Bill at 12:56 AM 1 comment:

Hey everyone I'm still here. I've been so busy the last couple months. My full time work did not shut down and I had to put in a few extra hours. With family at home it has been difficult to get any work done. Then to add insult to injury my computer Mobo got a bit wet from a dropped drink. I am still working on getting parts for a new computer. I'm working from an older laptop ATM. I'm hoping to get back up shortly. Getting things back to normal will be painful. Redoing settings will be a nightmare. Any donations at this time would be appreciated.
I'll try to get some new work out soon. I have to redo a bit of work, the HD my work was on might not be recoverable. I did have most all my work backed up on other drives so all is not lost.
Thanks!
Bill

For the commentor about Hanna's Wish and Truth or Dare not working, They worked for me through the site. If you still can't DL them give me an email billsender2013@gmail.com and I'll send you a link.
Posted by Bill at 11:42 AM 3 comments: